One to Watch: Dylan Wilson '22
April 4, 2019
Share to FacebookShare to TwitterShare to LinkedInShare to PinterestShare to EmailPrint this page
Like an elite athlete, freshman Dylan Wilson trains up to four hours every day, follows a strict diet, and rests before competitions. But instead of a gymnasium or gridiron, her platform is the stage. Discipline and dedication to craft, plus a natural gift for singing, are propelling the young soprano to success in the world of opera and classical vocals.

Recently, she placed Bronze in the Classical Singer Magazine Vocal Regionals and earned a first-round place in Classical Singer Magazine's Chicago finals in May. She and her voice coach Melissa Truitt, who has worked with Wilson since elementary school, are preparing for performances in Carnegie Hall as well as roles with the New York Lyric Opera. "I have signed a contract with the opera," Wilson says, "and will play Noeme in 'Cendrillon' and Barbarina in 'Le Nozze de Figaro.'"

Wilson has loved singing since she was 3 years old and began taking voice lessons at age 11. In grade school at Annunciation Orthodox School, she eagerly performed in the school musicals and chamber choirs. Here at EHS, she participates in MidKnight Blues, landed a role in the fall play "Othello," and hopes to add more performances with EHS Onstage during the next three years.

Blessed with both drive and passion, Wilson's next steps are sure to impress audiences in Houston and beyond. 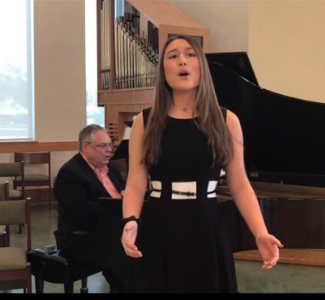